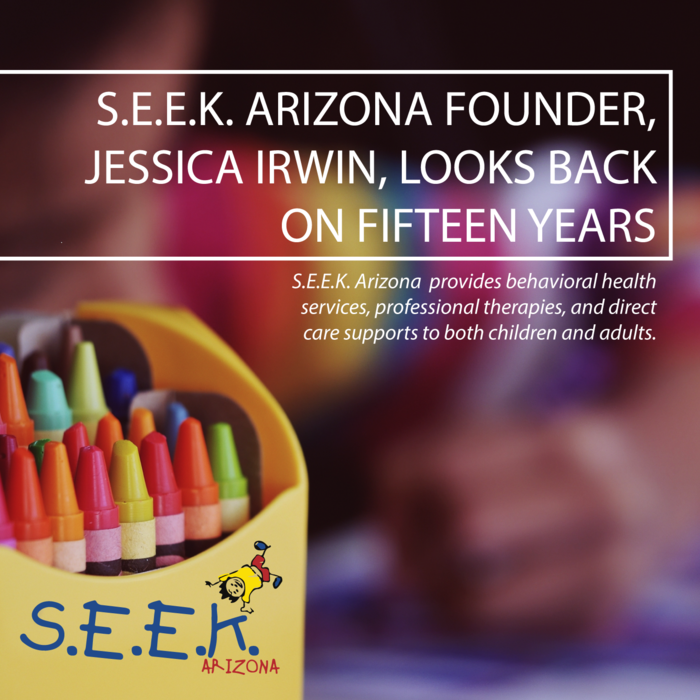 Jessica Irwin, who founded S.E.E.K. Arizona in 2003, has done a lot in the last 15 years building an impressive organization. We sat down with her to talk about what the last decade-and-a-half has looked like and she gave us some insight into what the process has been like for her.

Jessica tells us that she was working as a habilitator in the field and had the opportunity to do a lot of good work with some great families, but she noticed that those families were facing a gap in resources in the community. She saw the need for an agency that was integrated in nature, supporting both the families and the employees. Other agencies seemed to find it difficult to function as a resource for both.

“The hope was to do something different,” Jessica says.

And different is what she did. Starting out in her own basement, holding training BBQs in her backyard, Jessica built an organization that provides services families can’t get elsewhere as well as upward mobility for employees, boasting complete career tracks, and a preference for internal promotion amongst educators, caretakers, and other staff. Many employees have been with the organization over ten years.

Now that S.E.E.K. is a somewhat larger outfit, with four locations across Maricopa County, Jessica says she spends more time as an administrator. What motivates her these days is watching the employees and the passion they show for their work. She remarks, “They’re the ones who come back and say, ‘We can still do more.’”

In the last fifteen years, Jessica has built great memories and faced challenging experiences. She’s seen unique clients make strides that were, “just unbelievable,” recounting the story of a teen who started the life skills program at thirteen, continued on through graduation, served as a counselor-in-training at Camp Runamuk, went on to the University of Arizona, and served as a counselor during college.

She goes on to describe a preschool-aged child who was mostly non-verbal and had a difficult time participating and engaging but went on to Kindergarten and then 1st grade. “You would not know he had an autism diagnosis when he was younger,” Jessica says.

While the success stories are heartening, the challenges are heart-wrenching. Over the years, the state agencies have progressively had issues with funding and keeping programs alive has been tough when that funding dries up. Fee schedules become outdated due to lack of state funds and payroll for caretakers suffer in much the same way as that of teachers in state schools.

But the community that has formed around S.E.E.K. has become its support system as well. Jessica recalls how families went to the capital in 2009 during budget cuts to put a stop to the larger cuts.

“This journey has been a political journey as well as the development of a business, and a business that has become a family,” she says.

Here’s hoping for another fifteen years of success for Jessica and S.E.E.K. Arizona!